Neither squid nor octopus, this little deep-sea buddy is the last of the order “Vampyromorphida,”  its closest known relations being fossils.  It usually lives in extremely deep seas, due to its relative smolness and shyness.  Shyness aside, it keeps with the latest fashion trends, ranging its colors from jet-black to purple, a perfect summer outfit when you’re 11,800 ft beneath the sea.  When you’re all alone in the empty blackness of the ocean you tend to become rather introverted, something that the Vampire squid takes to with gusto as it can invert its whole body into a spiked football.  Given that it has the largest eyes in the world per its body size, it might be doing this to hide those beautiful peepers from the prying light of scientists and paparazzi.  Or it could be that its underside is the only part of it that aren’t covered in photophores, so turning inside out makes the vamp completely invisible in its natural habitat.  Every day is the weekend for the vampire squid, as all it wants to do is expend as little energy as possible, eat whatever garbage floats by, and be left alone.  For this, we recognize lil’ Vampy as our most kindred of sea creatures.

Goliath Tigerfish- Hydrocynus goliath Found in rivers and lakes connected to the Congo river basin in Africa .  The Goliath Tigerfish w aits for a challenge.  In its final form the Goliath reaches 5’ in length(152cm) and 150 lbs (68kg).   The average weight of a 19-year-old male human is 152 lbs.  Teenagers are scary enough, but imagine one with a mouthful of knives screaming and swimming at you underwater.  That’s the Goliath Tigerfish. These bad boys(and girls) live to kill, and kill to live.  They’re so powerful that they choose to live in and around fast-moving or turbulent water; where other fish struggle and falter in the current.  Using its keen eyesight and hearing, the tigerfish can easily identify struggling prey above the roar of the water.  When another fish meets the Goliath’s criteria for battle, it will first circle, analyze, then strike.  They’ve been known to cut a 60lb (27kg) catfish in half. https://en.wikipedia.org/wiki/Hydrocynus_goli 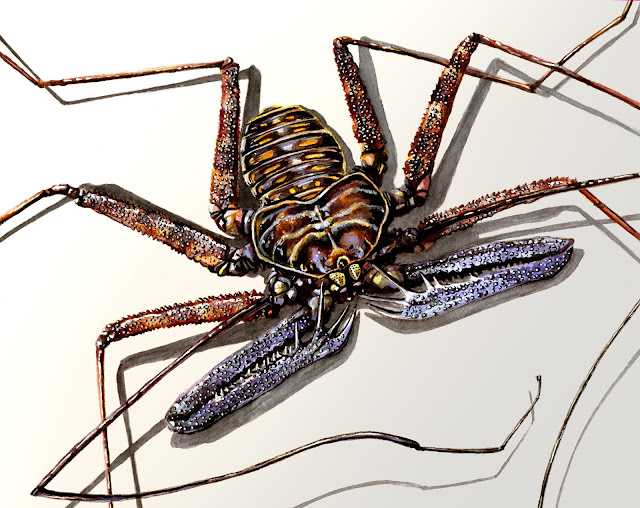 Tailless Whip Scorpion-Amblypygi aka The Taylor Swift Scorpion Half spider, half scorpion, all Taylor Swift. The Taylor Swift Scorpion, aptly named as it is harmless to humans, has long spindly legs that span over 2 feet (70 cm) and has very little talent for singing or showmanship. Harmless or not, we'd all be fairly spooked to find a Taylor Swift hiding out in our bathroom. They use their long, spiked pedipalps or "crab arms" to grasp and impale insects and small vertebrates. Their broad, flat bodies are perfect for clinging to cave walls or burying themselves in leaf litter to await prey. Like all Taylor Swifts, they're related to scorpions but are venomless and pose no real competition to other mainstream artists like Beyonce or Katy Perry. The Latin name for the Taylor Swift scorpion is "Amblypygid" or "blunt rump". Scientists can be judgy. Compared to other arachnids, TSSs are fairly social. They maintain territories, have elaborate